Time has slowed since my treatment in July. I've battled back-to-back bladder infections (thankfully halted by my neurologist's prescription for a daily antibiotic for three months), a severe muscle tear that flattened me for at least two weeks and made me relearn to walk and recondition from scratch, almost daily breaking news events that needed broadcasting to the online community, our Victoria information session with 275 people attending, and so much more.

Personally, I struggled to deal with the return of leg spasms for the first time since my treatment. Even though they were minutes (or less) long and not painful as much as a bother, I couldn't help but feel they could return to the daily agony I endured for hours at a time for years. I panicked, sort of, and contacted my angioplasty doctor in Albany, NY.

Let me just say how wonderful it is to have a doctor that answers my email within hours.

Anyway, on his suggestion, I returned to False Creek for a follow-up ultrasound in September. I was fortunate back in March that both my jugular veins showed clear problems on my ultrasound that were confirmed (and treated) during angioplasty. These problems were that my right jugular didn't flow properly when I was lying down; my left one didn't flow, or even empty, when I was sitting up.

I was optimistic my repeat ultrasound would show me how my veins had changed. I know the continuing benefits of no swallowing difficulties and greatly reduced spasms are a result of my angioplasty. At least an ultrasound would confirm the flow problems in my jugulars were fixed. As for my azygous, which had 5 stenoses, because it isn’t picked up well on a scan I choose to believe my five blockages there remain fixed.

So, onto the ultrasound! First, my left jugular was scanned lying down. Flow normal (as it was before). Now my right -- flow normal! The angioplasty worked! You can even see the footprint of the balloon on the endothelial lining...just fascinating! The doctor said he investigated this when he first saw it and the fuzzy walls are normal following a venous angioplasty.

With the ultrasound still on my right, the doctor scanned me sitting up. He confirmed my right was still normal. Now, when I’m still sitting, he scans the left... To my initial dismay he confirmed I still had the same flow problem as before. We tried a few times with me alternating between lying down and sitting up. Each time I sat up, the vein did not collapse and the blood remained at a near standstill in my vein. This is not normal! 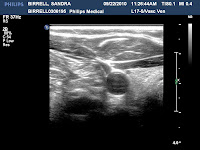 And here's the left -- two black dots equals both an artery and a jugular vein filled with blood. Trouble is, the blood in the vein isn't supposed to be there (and it's not moving very much). The doctor speculated the vein could be folding or obstructed on the outside by something. I recall the x-ray of this stenosis taken when my vein was angioplastied. Could my stenosis have been scar tissue from repeated pinching every time my head was upright? There's bone right at the point of the stenosis and muscle too -- maybe they are obstructing my vein somehow when I sit up? 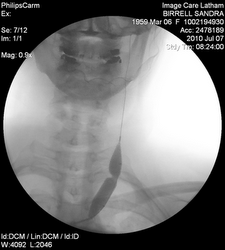 Stretching scar tissue won't make the cause of the scarring disappear. I need to see a surgeon. Angioplasty won't fix this.

Trouble is, I live in Canada and vascular surgeons are wary of seeing anyone with MS. This is my next battle in my ongoing fight for my optimal health.

In the meantime, since my muscle injury, the spasms have disappeared 99% again. I am so delighted and feel so very fortunate to have been angioplastied. I know my left jugular will eventually get fixed and there's even more possibility for improvement.

In the meantime, I continue the fight to bring treatment to Canada. Those of us with strong voices must speak for those who cannot. It's a battle we can't afford to lose.
Posted by Sandra at 11:02 AM 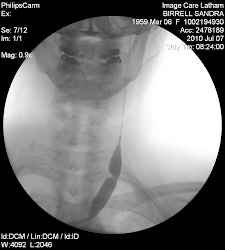 Sandra
Victoria, BC
I was diagnosed with MS in 1991, although my symptoms started before 1980. I was diagnosed with CCSVI in March 2010 and treated July 7, 2010. I created a blog, "Vein Musings," to document that experience. Now (2016), I started a new blog, "Gut-Brain Connections," to follow my journey with fecal microbiota transplantation (FMT) to address my gut dysbiosis and, perhaps, my neurological health. I am so fortunate to be a wife to Landon, a mom to Jon and David, daughter to my wonderful, but now deceased, parents Irene and Jim, sister to Jim, Rob, and Wendy, and friend to many others. I have a PhD from SFU in social media and learning. The rest of my story isn't written yet.